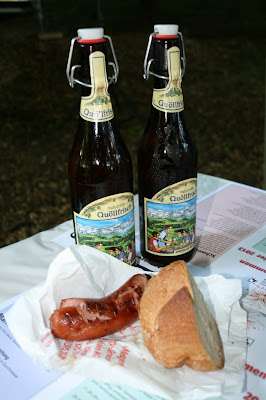 I am currently in Switzerland.....and having a great time as the weather is absolutely beautiful. The sun is shining and the temperatures are high, always around 32 C which is hot for Switzerland. Summer is always great here, the public pool is great, especially in the morning and then of course the is the Swiss National Day.

I have to admit that I did not go to the festivities for at least 20 years, not because I didn't want, but because I was never in Switzerland at that time, so being here now it is simply a must to go and it was exactly as I expected it.

Usually there is a place at a forest with loads of benches where one meets, there is usually one of the clubs running the restaurant so one just sits down where ever there is space and then gets what one needs. The most important part the sausage. You take either grilled Brat Wurst" or a "Servelat"with a piece of bread, best with a local beer. I will write another blog about some really interesting and nice beers I tasted. 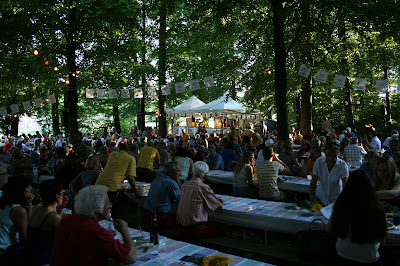 In Switzerland to eat a Cervelat with bread is like a national dish, it gets eaten every where, especially if one goes to sports events. We have it down to a fine art to have in one hand the hot sausage and the bread and in the other hand the drink, the challenge is not to burn the hand on the freshly grilled sausage.....yes we Swiss are strange sometimes!

Let me tell you a bit more about the cervelat. According to Wikipedia it is described as following:
For the first time in 1552 this spelling appears in Rabelais . She goes back to the Milanese dialect word zervelada and the resulting Italian cervelato. In Switzerland 160 million annually cervelats be produced, so the average Swiss eats 21 cervelats per year.

The sausage mixture consists of approximately equal parts beef , pork , back fat / ground rind and ice and spices and pickling salt. There are no more offal are processed for cervelat. The ingredients are in boats crushed into natural casings filled (imported, mostly Brazilian), smoked for about one hour at 65 to 70 ° C first and then scalded at 75 ° C in a water bath or in the cooking cabinet. 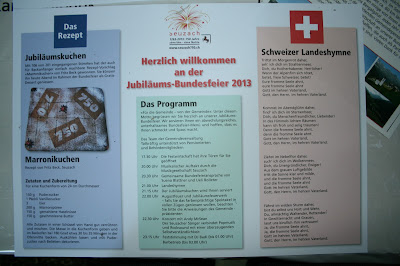 Anyway, back to the festivities. During the evening the local music club is playing, then of course there are speeches, usually by politicians but this time it was a bit different, actually very nice as it was not always the same political bladibla one hears all the times, then of course we all got up to sing the national anthem....hehehe, it was printed everywhere because the majority of Swiss can't remember the words, yes me included. Then we all got a slice of cake for the 750 year birthday of Seuzach, our home town and then finally, the fire works, the thing we were all waiting for and waited for long as it only started around 1030 PM as it needs to be dark, makes sense I guess....just after the first big bout of fireworks everything stopped for a long time....guess there were some problems in the back

But overall it was a great evening, nice to be back here for this special event, it was worth coming here and having a good time 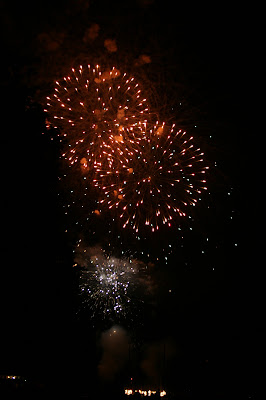