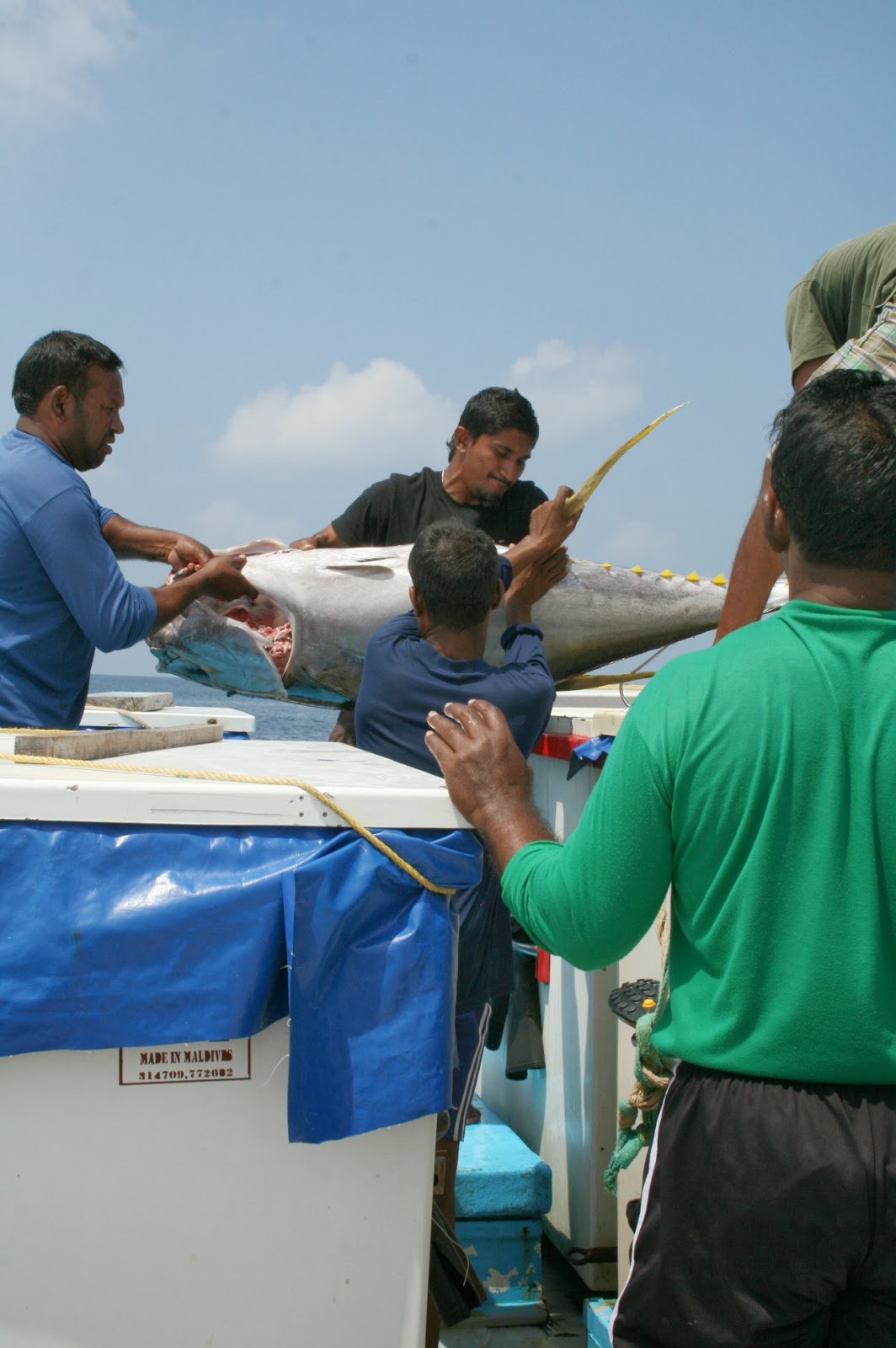 Today is no recipe, but a little story that just happened a little while ago.

We are trying to buy as much local as possible, but sometimes it is not easy. The fishermen don't always have the fish we want and this time we were really running around. We had an arrival who wanted to buy an entire tuna, he then wanted to see it and after that we would have to cut out bit by bit and cook it for him in different ways and methods. Generally no problem except.....our fishermen are not lucky with yellow fin tuna at the moment. 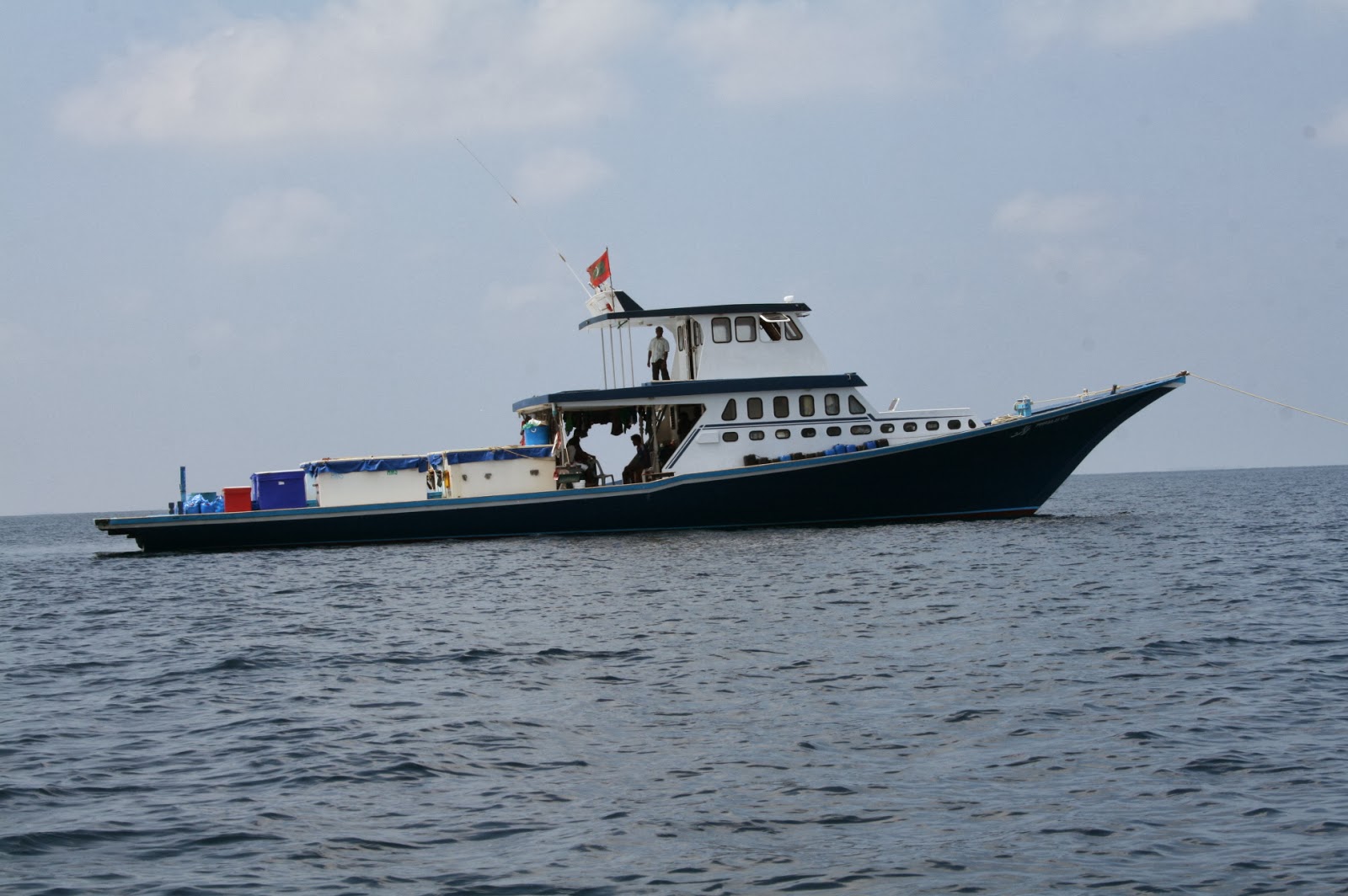 So we took it in our hands, went off and took the speed boat to see a close-by island that has a tuna canning factory on it. We thought they must have fresh tuna and would part with one or two of them. We were all in a great mood and off we went. 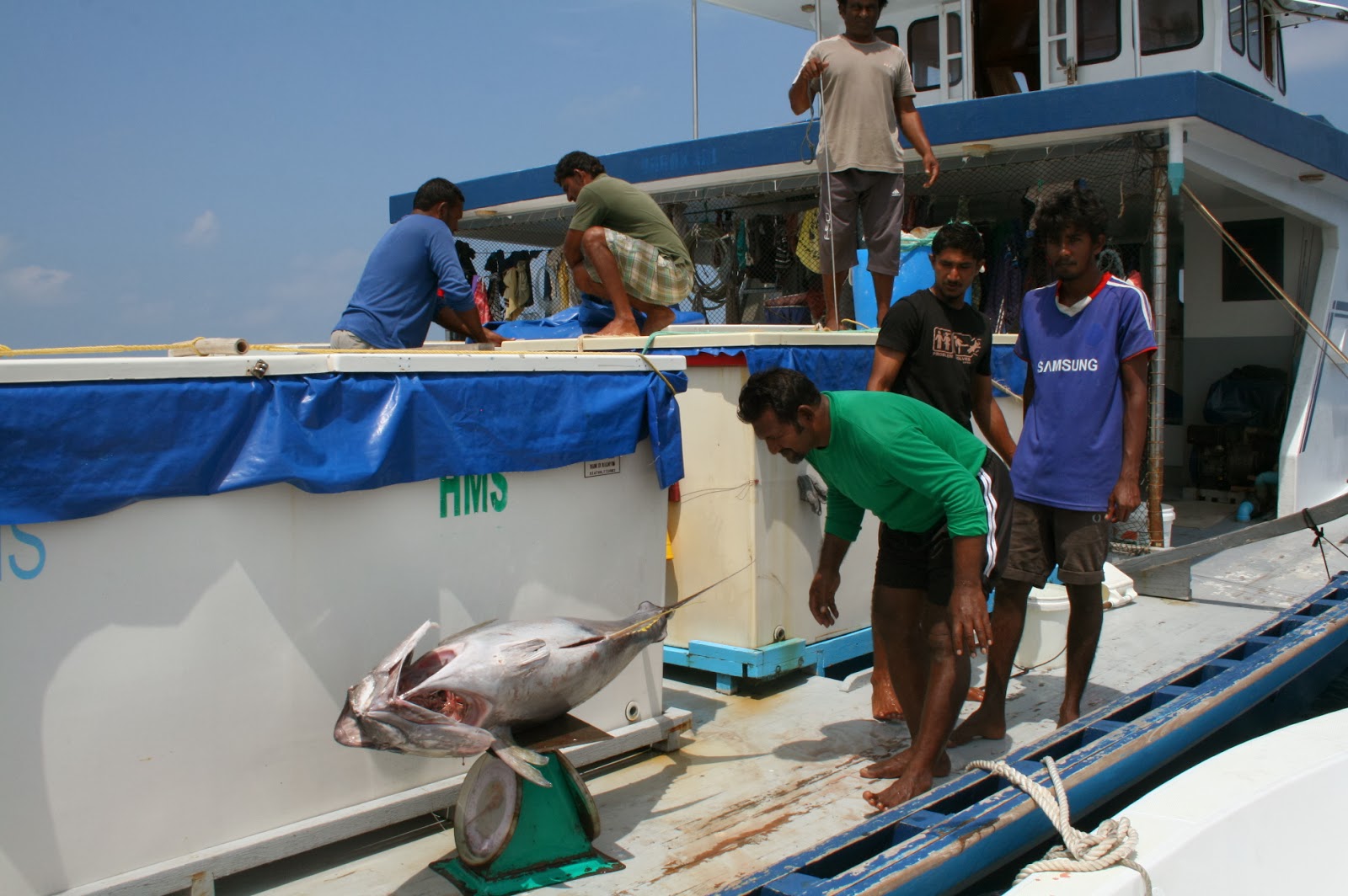 On the way we saw a fishing boat with tuna, so we made a little detour and checked it out. There are about 8 men living on board the vessel, there was a tiny little kitchen, nothing I want to photograph and put on my blog, trust me, it was really terrible. But we did not come to see their kitchen, but the tuna.

They had quite a bit, all stored in big containers filled with ice water. The tuna was nice, just the price they wanted was more than double than our normal fisherman is charging us. Maybe they could feel that we were sort of desperate for fresh fish. Anyway, we thanked them and off we went to get to the island we originally wanted to see, being convinced that the price will be less.

Till.......one of the engines gave up, caramba, we really did not need that. In the middle of the sea, the gears just fell out and the boat would not go any further. So we had to turn around, without our priced tuna, to get back to our island, which now of course would take about 2 hours instead of 20 minutes. 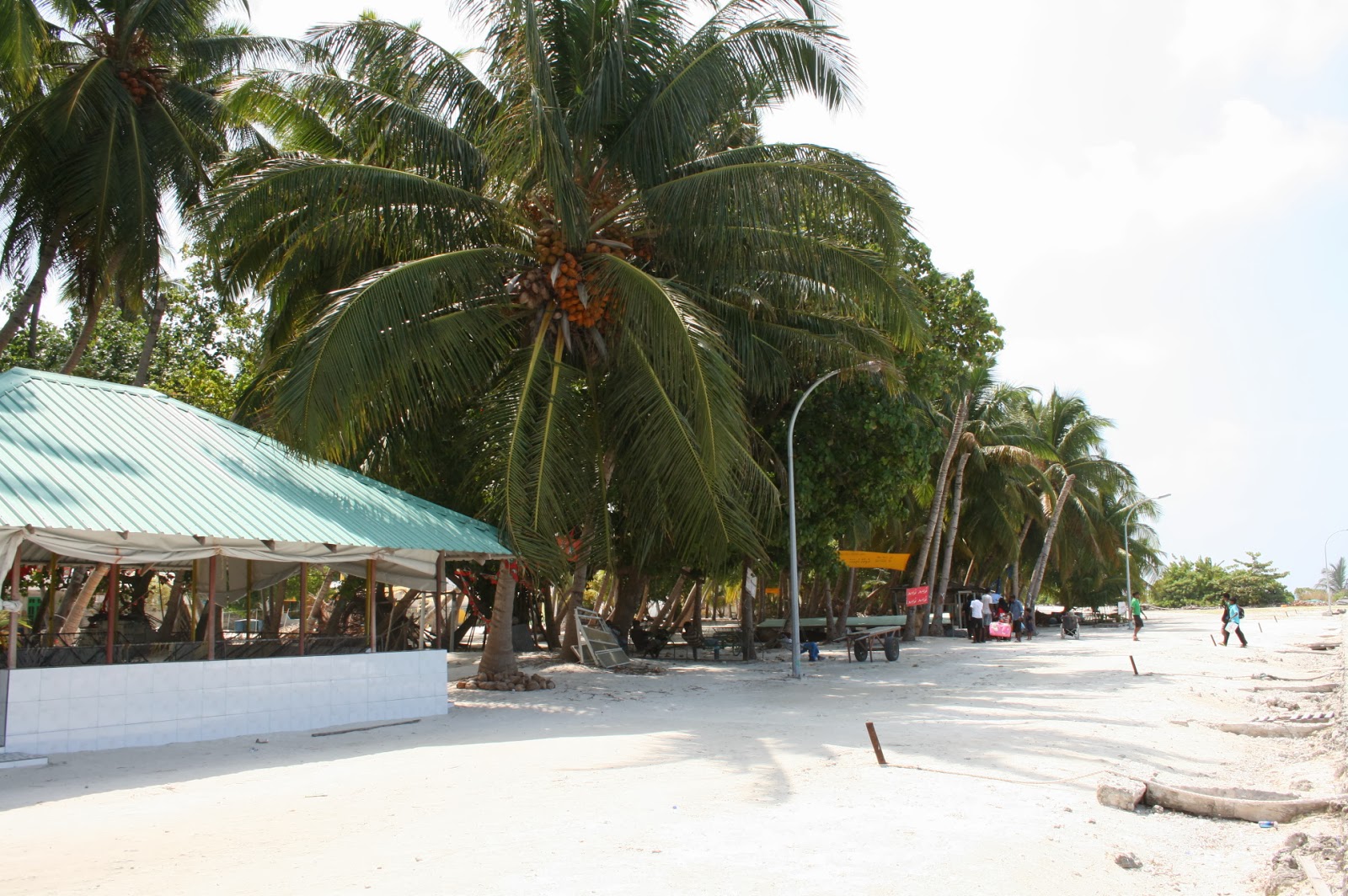 We had no choice, but go back to the other fishing vessel, schmooze them a bit and buy a tuna or two. They were still happy to sell tuna, of course there was absolutely no bartering at all, we had to pay the given price. I was naturally a bit picky about the tuna, but after checking out a couple of fishes we found some really fresh and lovely tuna. 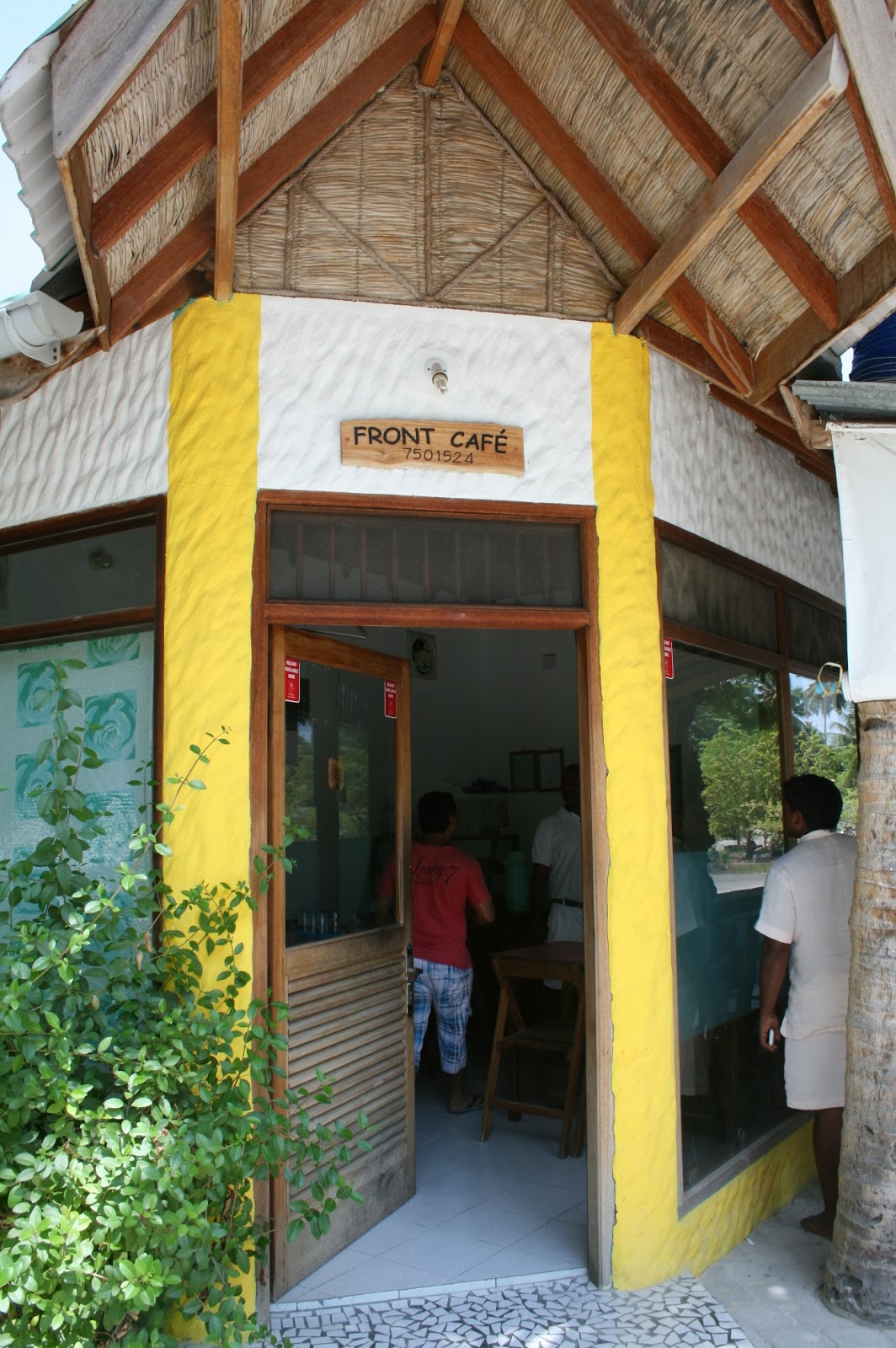 We put it on the boat, covered it with a towel and prayed it with water, we still had quite a bit to go till we were home. So as it took such a long time we knew that we miss lunch, so what would be close than just stopping on one of the slands and have some lunch. Our boat crew knew about a restaurant and called them up....yes, these islands are so small, they don't just have food for 5 people, hehehe, so we pre-ordered our food, the choice was fried chicken noodles or chicken noodle soup!

The food was actually really nice, we had some starters and then some tea as well, sweet and sticky but very welcome. Then the bill was presented, or whatever you call this tiny little piece of paper whit the number 237 on it. that was the amount in Maldivian Rufiyaa and translates to a little more than 15 USD. Yes for that we could feed 5 grown men and we nearly had some food left over too. 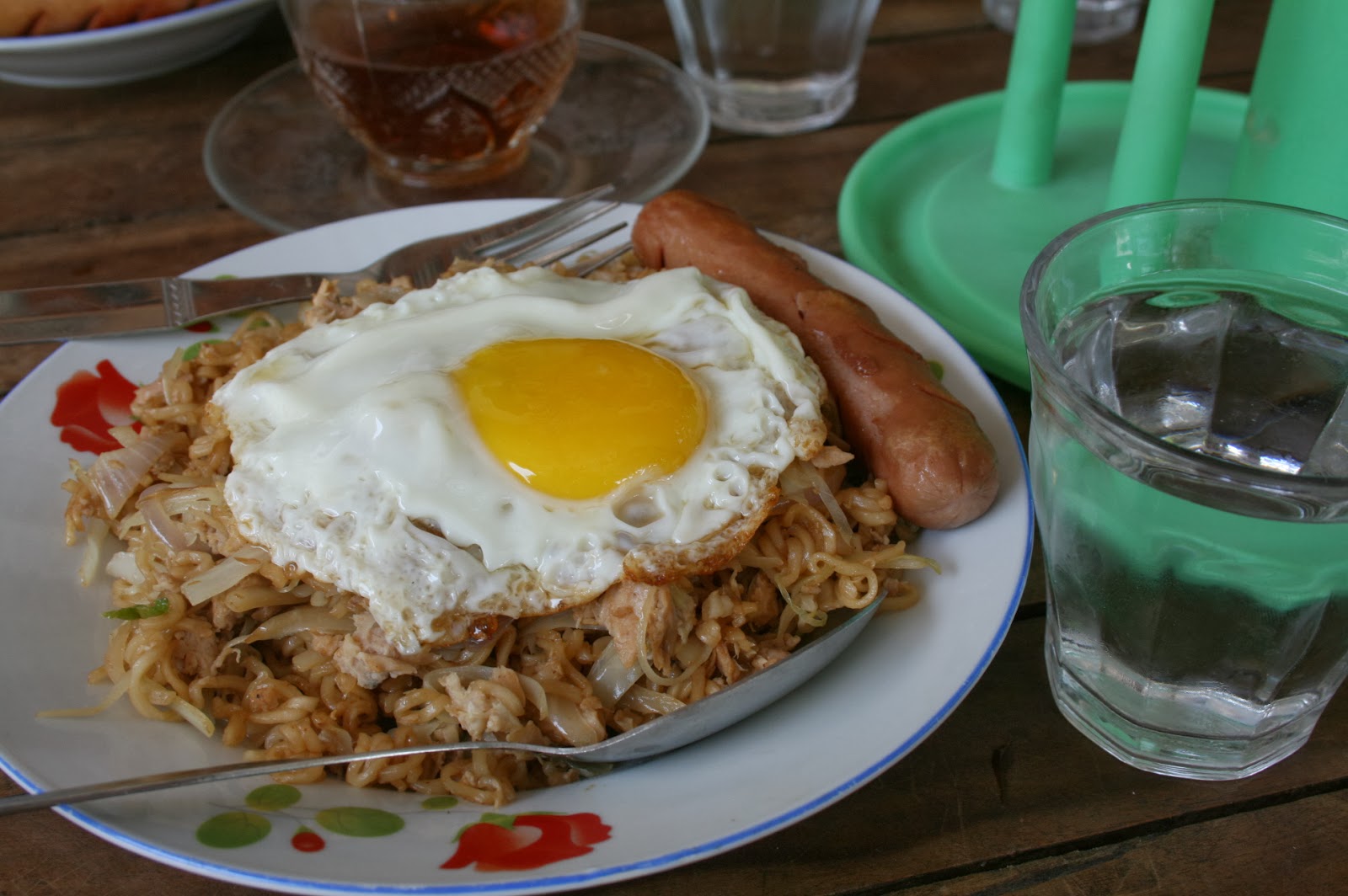 We then went back on our "speed" boat and arrived back at Soneva Fushi literally 2 minutes before the guest arrived. On arrival we chowed him the fish and he could see that we just came back with his fish, so he was absolutely happy about it and chose the bigger fish which we then served in all sorts of ways.
It is not every day that we get out like this, but with all the miss hap we had on this trip, timing was at the end absolutely perfect and we had another happy guest.....and we had a great time after all too.
Posted by Unknown at 7:08 AM