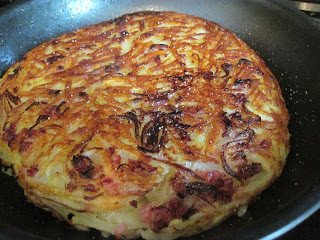 Hello everybody
As you can see, the blogs are slowly coming in again, and there is more to come, especially about Philippines. But right now I am just burning to give you a recipe. A very, very simple recipe I made when I was now in Switzerland. It is a national dish made out of Potatoes. It is the famous Rӧsti.
There are two ways on how to make a really good Rӧsti one is with pre-cooked potatoes and the other one is with raw potatoes. Both ways give you an excellent result, but you need to take care of this dish to have really good results. I usually make the Rӧsti with raw potatoes but like both ways the same.
Just a short story about the Rӧsti. In Switzerland are two main types of Rӧsti, the one made in Zurich (where I am from) and the one in Berne. Both counties say that they are doing the original and there is a constant quarrel about whose is the original one. I don’t really care but I want to tell you the difference. The one from Zurich you have to add Onions and Bacon to the potatoes and for the one from Berne Bacon and onions........get the hint? They are actually both the same and don’t forget, we don’t have potatoes since such a long time in Switzerland. The potato came to Switzerland about the same time the rest of Europe introduced this Central American Tuber......
But now to the recipe, don’t forget, it is such an easy dish to prepare, but you need to give it time and love!
1500 G Potatoes
150 G Butter clarified Peel the potatoes and let them cool down completely
200 G Onions Grate them in a Rösti grater
100 G Bacon, smoked Cut onions in a fine julienne
Salt, pepper Cut bacon in a fine julienne 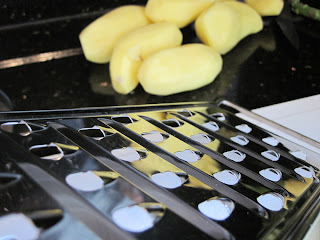 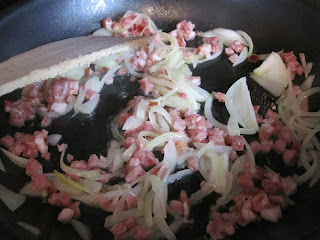 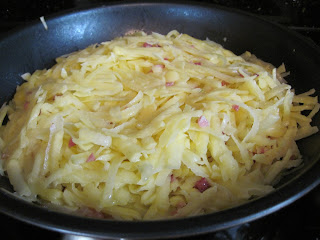