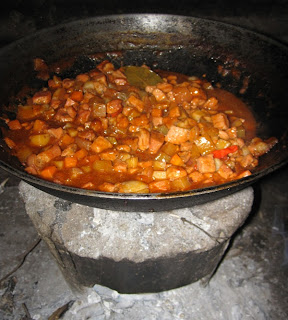 Like I said, food is very important here in Philippines and people eat out often. Generally it is cheap to eat out, especially in the fast foods and local restaurants. As soon as one goes to a special restaurant it can get costly, but still cheap compared to the US or Europe. 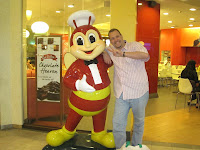 One of the best known fast food chains here is JolliBee and Chow King. To feed 4 people it will cost about 10 USD in total, which is nothing. The fast foods are very popular and often one just orders and pays the food at the till, then gets a number and the food gets brought to the table, even if the restaurant is pumping.
Of course I was into the Halo Halo again and we had it several times. The traditional one is with the shaved ice and all the condiments on top ( sago, sweet cooked corn, red bean paste, flan, jelly, Caramelized Bananas, Coconut and of course Ice Cream) and once we got an “organic” one with fresh papaya, mango, coconut, banana and ice cream, on the shaved ice. Instead of the condense milk they used coconut milk.

During my time here in Philippines I was fortunate to have a lot of home cooked meals, all traditional and made from scratch. During a getaway to the beach in Batangas we had another highlight; we made fresh coconut milk for a traditional dish, spicy chicken in coconut milk. It was fascinating to see how the older coconuts get peeled and then cut in half, just to get all the white flesh out. The flesh is then pressed out to get the real coconut milk. Often the rest is then mixed with some water, boiled up and then pressed out. This coconut milk is not as flavourful, but still very good for cooking. 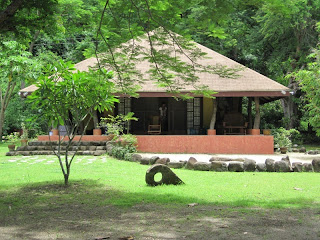 Batangas is beautiful, very tropical and we had a house not even 50 meters from the beach, totally secluded from anybody. That means we had to bring all our food and drinking water for the three days we stayed there, that is a lot of stuff to feed the 6 of us and then we bought enough to cook with our friends who live there and look after all the beach houses. The pork stew, the recipe is below is cooked on fire, very traditional and tasted just delicious, a real treat. The ladies were cooking half the day as everybody was invited, so we ended up to have about 15 friends and family all enjoying the food tremendously. Then there was a birthday too, the little baby boy was one year old, there must have been about 30 people in total and the cooking went on and on and on. 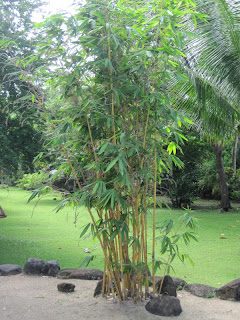 One has to be careful as there are plenty of mosquitoes, but they are everywhere in the Philippines, especially here at the beach. With us living in the mountains (300 m above sea level) it is a bit better and the temperatures are a little cooler, just a little but one can feel the difference. The air is much better too, not like in Manila where there is just plenty of pollution.
Pork Afritada

Ingredients :
• 1 lb. pork, cut into serving pieces
• 1 tsp. salt
• 1/8 tsp. pepper
• 3 cloves garlic, minced
• 1 onion, sliced
• 1 tbsp. patis (fish sauce)
• 4 potatoes, peeled and quartered
• 1 cup water
• 1/2 cup tomato sauce
• 1 red bell pepper, sliced
• 1 green bell pepper, sliced
• 2 tbsp. fine breadcrumbs (or flour, or cornstarch)
• vegetable oil
(Cooking Conversion Chart)
Cooking Procedures :
1. Put pork in a bowl and season with salt and pepper. Let stand 10 to 20 minutes.
2. Heat oil in a skillet over medium heat. Stir-fry pork pieces until no longer pink in color and turn lightly brown.
3. Add and sauté garlic until fragrant. Stir in onion until soft and translucent. Season with patis and then add potatoes, stir-fry for a few minutes.
4. Pour in water and tomato sauce and bring to a boil. Lower the heat and let it simmer covered for about 25 to 30 minutes or until pork is cooked and potatoes are tender.
5. Add in bell peppers and stir to blend. Correct seasonings. Thicken sauce with breadcrumbs (or flour, or cornstarch, if using). Stir and blend and let simmer for another few more minutes.
6. Remove from heat. Transfer to a serving dish and serve hot.
Posted by Unknown at 8:09 AM